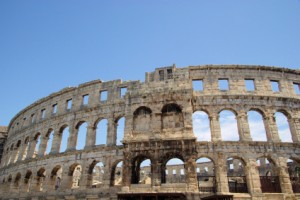 This week, while working on a transformational client engagement, Brad and Mike were fueled by an inspiring quote from Theodore Roosevelt.  This amazing paragraph was an excerpt from the speech “Citizenship In A Republic” delivered n Paris in 1910.

A well-respected leader stopped right in the middle of a whiteboard planning session and had us pull up the passage on our computer.   It was one of those special “moments” in your career that something hits you with an incredible force.  We wanted to share it.

The Man in the Arena

It is not the critic who counts; not the man who points out how the strong man stumbles, or where the doer of deeds could have done them better. The credit belongs to the man who is actually in the arena, whose face is marred by dust and sweat and blood; who strives valiantly; who errs, who comes short again and again, because there is no effort without error and shortcoming; but who does actually strive to do the deeds; who knows great enthusiasms, the great devotions; who spends himself in a worthy cause; who at the best knows in the end the triumph of high achievement, and who at the worst, if he fails, at least fails while daring greatly, so that his place shall never be with those cold and timid souls who neither know victory nor defeat.

We now have another fantastic way to name our War Rooms….  The Arena.  In fact, it inspired the name of our next war room: “The Change Management Arena.”  We will post the quote on the wall and it will guide the development of authentic gritty high-involvement methods needed for the intense multi-year project.

Mike and I have found that a big part of growing, both personally and professionally comes from the never-ending quest for more effective leadership.  Collaborative inspiration from leaders you admire and respect fuels and inspires collective aligned growth.  Or as some people call it … culture.

Isn’t it amazing how small firewood bundles of words and ideas can stoke the inspirational fires!

Read the whole speech at: http://www.theodore-roosevelt.com/trsorbonnespeech.html